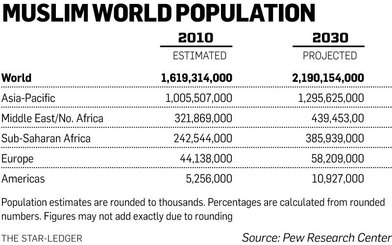 Islam Today and in the Future
session Four
In the previous sessions we looked at the founding of Islam as a religion. We read that Muhammad began by preaching a message ... of the unity or oneness of God, and that he was God's last prophet. We discovered that he changed his approach after gaining enough strength in the form of people who converted to his religion. He began to spread his religion through the use of force.

We looked at a map which showed the spread of Islam within the first hundred years or so.
We looked at the Qur'an long enough to determine it's nature. We found it was a book recited or told only by Muhammad to his followers. We saw that often a new chapter would be added very conveniently to benefit himself. We saw verses which very clearly state the Jesus did not die, but that Allah took him up to heaven after they found a look alike substitute to put on the cross. We discovered that Muslims do not believe that babies inherit a sin nature from Adam at all, and that there is no need of any sacrifice to pay for sin.

We learned that Islam has six articles of faith which Muslims are required to believe..

1. Belief in Allah – He is One and Muhammad is his prophet.
2. Belief in the Angels -
3. Belief in Divine Books – The Torah (the OT) the Injel (gospel or NT), the scrolls of Abraham (????), and the Qur'an (the scriptures recited to Muhammad by Gabriel). They believe the only 'uncorrupted' portions of the bible that remain are those portions repeated in the Qur'an.
4. Belief in the Prophets – Adam was the first one. Moses, Abraham and Jesus are all prophets. Muhammad is the final one.
5. Belief in the Day of Judgment – The grave has a spiritual kind of torment, but it is nothing compared to the final judgment.
6. Belief in Allah's predestination – Everything is predestined by God, and yet we have free will and are responsible for our actions.


We also learned that Muslims have five pillars of action. They are:
1) Shahada: Testifying to God's One-ness: The declaration "There is no God but Allah and Muhammad is His prophet."
2) Salat: Prayer. Pray faithfully five times a day.
3) Zakat: Giving to charity. Originally a tax but now a free-will donation to the poor
4) Sawm: Fast. They eat no food from daybreak to sunset during the month of Ramadan (September)
5) Hajj: Make a pilgrimage to Mecca at least once in their lifetime.


Muslim is a simple religion of action. However Muslim scholars abound who take the writings of the prophet Muhammad to study and analyze them. These writings are called HADDITH.
It is from reading the Qur'an and the haddith, together with commentary by some of their greatest scholars, we come to understand just what kind of a religion Islam actually is in our time.

We have enough infomation to know that followers of Islam are unsaved.
So now we turn to a look at Islam in our present day.

1. We will look at Muslim demographics – What is the estimated total of Muslims in the world and what are the numbers country by country.
2. We will look at the present Muslim 'denominations' and how their beliefs differ.First I will give a bit of a glossary of terms used within the Muslim community. You can look it over and refer to it as needed.

Brief Arabic glossary
Qur'an: The words of Allah recited to Muhammad by the angel, Gabriel.

Mr 10:28 Then Peter began to say to Him, "See, we have left all and followed You." 29 So Jesus answered and said, "Assuredly, I say to you, there is no one who has left house or brothers or sisters or father or mother or wife or children or lands, for My sake and the gospel’s, 30 "who shall not receive a hundredfold now in this time——houses and brothers and sisters and mothers and children and lands, with persecutions— —and in the age to come, eternal life.

2Ti 3:12 Yes, and all who desire to live godly in Christ Jesus will suffer persecution.

Mt 5:10 Blessed are those who are persecuted for righteousness’ sake, For theirs is the kingdom of heaven.

So, does fundamental Islam present a threat to believers? Well, according to these verses, persecution should not come as a surprise. I think many of us have come to see our way of life as some kind of a fundamental and basic 'right'. America has put it into their constitution. So an American Christian can say, 'I have every right to expect freedom to follow my pursuit of happiness.' How foreign, how strange this concept is to the vast majority of Christians who are serving God under conditions of persecution at this very moment! Christians in the west, living in ease and freedom are in the minority. This freedom and life style are (is?) an exception ... not the rule.

I will summarize MacArthur's comments:
The Mahdi, or the Twelfth Imam, that means the guided one, is the long-awaited savior. He is the establisher of the final Caliphate. The world must follow him as he takes over or he will destroy all enemies of Islam. He will come and he will carry on holy war and either you convert or you’re killed by the Mahdi. He will have an army. His army will be a massive army and his army will go from nation to nation to punish the unbelievers. The holy writings of Islam say that this army will carry black flags. And on those black flags there will be one word and that one word will be the word Punishment. By the way, the Iranian army today carries black flags. They want to be ready for the coming of the Mahdi. There is an understanding within the radical Muslim belief that says that the Mahdi (who has been in hiding for over a thousand years) will show up to bring in peace. He will appear at a time when there is no peace. The radicals believe that the more chaos they create ... the sooner the Mahdi will show up.
According to their holy writings, the Mahdi will bring rain and wind and crops and wealth and happiness so that all will love him and no one will speak of anyone but him. Their writings say the Mahdi will come and make, at first, a peace agreement with the Jews and the west for seven years. The reign of Mahdi will last seven years in which he establishes Islam on the earth.

Their holy writings say this, the Mahdi will come riding on a white horse, and it even says in their writings, “As it says in Revelation 6:1 and 2. Saddam Hussein, by the way, painted murals of this Mahdi on a white horse all over Baghdad. And he comes carrying a sword to kill the infidels.

If any of this sounds familiar, its because it is exactly the same as we read in our bibles.

The only difference – Put Anti-Christ in the first slot above
Put False Prophet in the second, and put Jesus in the last one.Mt 16:24 ¶ Then Jesus said to His disciples, "If anyone desires to come after Me, let him deny himself, and take up his cross, and follow Me.25 "For whoever desires to save his life will lose it, but whoever loses his life for My sake will find it. 26 "For what profit is it to a man if he gains the whole world, and loses his own soul? Or what will a man give in exchange for his soul? 27 "For the Son of Man will come in the glory of His Father with His angels, and then He will reward each according to his works.


1 And in their footsteps, We sent 'Iesa (Jesus), son of Maryam (Mary) confirming the Taurat (Torah) that had come before him, and We gave him the Injeel (Gospel), in which was guidance and light and confirmation of the Taurat (Torah) that had come before it, a guidance and an admonition for Al-Muttaqun (the pious - see V.2:2). S. 5:46 Al-Hilali & Khan; cf. S. 57:27
He Jesus said, "Lo, I am God's servant; God has given me the Book, and made me a Prophet." S. 19:30 Arberry
It is He Who has sent down the Book (the Qur'an) to you (Muhammad) with truth, confirming what came before it. And he sent down the Taurat (Torah) and the Injeel (Gospel). S. 3:3


2http://timesofindia.indiatimes.com/world/middle-east/4-questions-ISIS-rebels-use-to-tell-Sunni-from-Shia/articleshow/37257563.cms
3http://pamelageller.com/2014/04/sharia-sweden-new-law-criminalizes-criticism-islam.html/
4Heb 11:9 By faith he dwelt in the land of promise as in a foreign country, dwelling in tents with Isaac and Jacob, the heirs with him of the same promise;for he waited for the city which has foundations, whose builder and maker is God.
5Seeking Allah ... Finding Jesus. By Nabeel Quresh. Zondervan. And The Gentle Answer, by Gorden Nickel, published by Bruten Gate, Calgary ISBN:978-0-9939972-1-1 to name just two.